IN WITH THE CHAPS, Yah-Boo Club, Monday (NNN) — Otis Ferry, 26, pro-hunting campaigner and arrogant over-monied twat who wastes oxygen like there aren’t decay bacteria who could make good use of it, will spend Christmas in jail after bail was denied today. 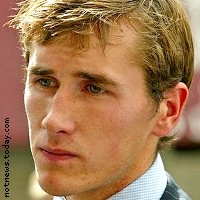 The son of Roxy Music singer Bryan is charged with assault, robbery, two counts of perverting the course of justice and being an arrogant over-monied twat. He will stand trial in March for truly mind-bogglingly arrogant twattery.

Mr Ferry has made numerous applications for bail, despite repeated claims that life in prison was easy. “Oh, come on — I boarded at a public school. Though I do work to get along with the other inmates, however, regaling them with tales from the hunt and the party circuit.”

“Honest, Guv,” said multiple murderer Bob “Pound You To Mincemeat” Fister, “he opened his mouth and it woz like my brain woz bein’ sucked out my ears. Lord love a duck, get me away from the twat in case I catch a terminal case of twat or something.”

Mr Ferry is likely to remain on remand at HMP Gloucester until his trial on March 9, despite legal action by other prisoners under European human rights legislation.