A344, Gateway To The West, Sunday (NNN) — Hundreds of druids, pagans, witches and tourists flocked to Stonehenge in Wiltshire to celebrate the Winter Solstice early this morning. The pagan tradition, celebrating the shortest day of the year, has gone back hundreds of years since being reconstructed in 1954 by Gerald Gardner. 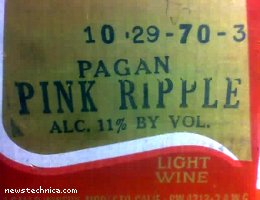 About 1,900 people, some dressed in cloaks and robes, saw the sunrise at the prehistoric site, before grabbing a previously-captured Christian virgin male and burning him in a giant wickerman on the site.

Pagan priestess Hypatia Eldritch-Wyldeblood (name legally changed from Tracey Clegg), 19, explained the long tradition of Paganism in the UK. “A lot of people say it’s just kids being trendy. But I’m from a family tradition of witchcraft and paganism going back at least a generation. Not like those Christians, they just make it all up as they go along. Jesus was a pagan, you know — frankincense was actually a shamanistic drug back then, which let the Three Mystical Seers visualise a star of pure astral energy guiding them. The forty days in the desert actually happened over one night on ibogaine. ’Strue, it’s all in this pamphlet from Salisbury Tourism!”

Salisbury Tourism has been working on enhancing the site, with Saturday night wickerman barbecues (“Get your revenge for the Burning Times! Fosters and Kronenbourg mead 2 for 1 Happy Hour! Skyclad after midnight!”) and a concession stand doing a roaring trade in fluffy bunnies. A local tax has been placed on purple to fund the redevelopment.

A £20m visitor centre is to be built at the site, but English Heritage and The National Trust are arguing vociferously over where the centre should be built, trading insults and calling each other’s mother a Christian. English Heritage consultants had sacrificed £2m to the ancient god Mammon in the process.

3 thoughts on “Pagans flock to Stonehenge for winter solstice”