Sir, We are a group of UK film and TV producers, directors and writers. We are concerned that the successes of the creative industries in the UK are being undermined by the illegal online file-sharing of film and TV. 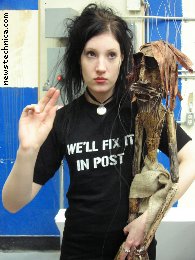 We are asking the Government to show its support by ensuring that internet service providers play their part in tackling this huge problem by giving us money. Lots of money. Just keep piling it in, we’ll tell you when it’s enough.

In 2007, up to (well, it could be) 25 per cent of all online TV piracy took place in the UK. Popular shows are downloaded illegally hundreds of thousands of times per episode, and some of them might even be ours rather than something American made with an actual budget.

It is true that in 2008, UK commercial TV broadcasters enjoyed the highest viewing figures in five years, that total TV viewing was up 10% year-on-year, and the valuable yet hard-to-reach 16 to 24-year-old demographic (the typical file-sharer) watched 4.9% more commercial TV and saw 12% more ads. But it’s the principle of the thing: someone is getting money from something that touches something one of us once touched, therefore the money belongs to us. This is the style of corporate thinking, after all, that brought Britain its great economic gains from 1997 to 2007. At a time when so many jobs are being lost in the wider economy, it is especially important that our gravy train be maintained.

Internet service providers have the ability to change the behaviour of those customers who illegally distribute content online. They have the power to make significant change and to prevent their infrastructure from being used on a wholesale scale for illegal activity. They have the power to stop people looking at the cover of Virgin Killer. They have a secret magic wand that will fix everything wrong with the media industry’s income streams and they are refusing, with malice aforethought, to use it. If they are not prepared to give us all the free money we ask for and a bit more besides, they should be compelled to do so.