DOWN T’ PIT, London EC1, Wednesday (NNN) — Business leaders were unanimous in their protest against the European Parliament vote to scrap the UK’s opt-out from the Working Time Directive. 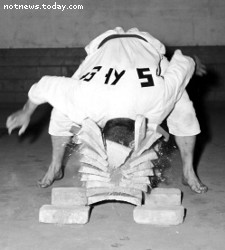 “Workers should be free to work any seventy hours they choose. There is of course no element of coercion whatsoever in any workplace we could find, and we actually asked the proprietors of as many as two or three.”

They also noted the terrible effects such a ban would have on the hospitality industry, with the normal British worker no longer needing to down six pints in their three spare hours a week in order to regain the power of speech.

Alejandro Cercas, the Spanish Socialist Workers’ Party MEP who brought the vote, said the parliament’s 421-273 vote to end the opt-out would help create “a social Europe,” where all workers, jobs and pay packets would be interchangeable and indistinguishable and everyone could live in clean and spacious grey concrete blocks just as good as everyone else’s.

The NHS cautioned against the possibility of junior doctors no longer working 72-hour shifts, as having enough time off shift to be aware of their surroundings might lead to them realising what a hellhole they had signed up for.

Alan Duncan, the Shadow Business Secretary, attacked Gordon Brown for failing to control Labour’s MEPs. “The only way out of the recession is to allow workers an unimpeachable excuse to get the hell away from their families. British business will be unable to compete if individuals do not have the free and untrammeled choice to choose to slurp heartily at the anus of their undoubtedly charming and personable line manager for seventy hours in a week while being paid for forty.”

When it was pointed out that business leaders had said this about the five-day week, every health and safety rule ever written, the abolition of child labour and the abolition of slavery, he said “British business can’t possibly compete if it has to spend time thinking up new excuses.”