WOT’S ALL THIS THEN, ’Ello ’Ello ’Ello.co.uk, Thursday (NNGadget) — UK police are asking for a “breathalyser”-style tool for computers that could instantly flag up illegal activity on any PC it is attached to. 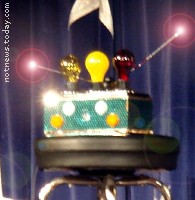 “It’s surely just a simple matter of programming,” said McMurdie. “We’re seizing so many computers from people with a copy of Virgin Killer that frontline police need a digital forensic tool as easy to use as the breathalyser, to magically flash up ‘HONEST UPSTANDING CITIZEN’ or ‘’E’S A NONCE, GUV’. Do we need to seize five computers, all their mobile phones, their CD and DVD collection and basically everything that runs on electricity, or could we use a magical police gadget with impressive flashy lights and stuff? I thought computers were supposed to make life easier!”

The eventual development of such a tool could help ease a backlog of digital forensic work that has officers waiting up to a year for evidence to be recovered from seized machines, though threatening to destroy people’s livelihoods has proven very efficient in extracting confessions.

EDS Capita Goatse have promised they can “absolutely, definitely, certainly, probably” produce such a tool with only an ironclad £100m five year contract, and also reliably determine whether a computer program halts or not. The Internet Watch Foundation also demanded to be involved, and were told their details would be kept on file.

“It was so much simpler in the old days,” sighed McMurdie. “People asking you what time it was, burglars with domino masks and striped jumpers and bags marked ‘SWAG,’ chirpy Cockney sparrow second-hand car dealers wiv a heart of gold … you just can’t get the wood, you know.”