MENEZES, London EC1, Friday (NNN) — The jury has returned an open verdict at the inquest into the death of Woolworths, which people mistook for a viable company. It rejected the administrator Deloitte’s account that Woolworths was killed lawfully by two auditors who shot it seven times in the High Street. 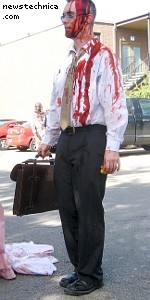 Neville Kahn, a partner at Deloitte, said they had only been seeking to get the best value out of the stock and assets, and certainly hadn’t just been looking for a whacking bonus on selling the patient’s organs off, no no, with deep discounts on the last of the insufficiently cheap though quite nasty plastic crap, Irish pork, Haringey social workers, lesser Geldof daughters, copies of Virgin Killer and behind-the-counter cigarettes. And bloody pick and bloody mix.

Did receivers shout ‘armed accountants’? NO
Did difficulty in identifying the point of the company under surveillance lead to its death? NO
The pressure on auditors after the financial suicide attacks of late 2008? CANNOT DECIDE

Prime Minister Gordon Brown told the Commons the death had been a “most terrible mistake, which we deeply regret … Oh, we’re not talking about banks or financial services? Right-o, carry on then, blow the buggers’ brains out. I’m busy saving the world over here.”

The bullet-riddled corpse of the company will be sold off for parts. The stores have attracted the interest of Asda, Morrisons, Lidl, Poundland and Dixy Authhentiic Fired Cihcken. The name will, with economic deflation, become Wlths.

One thought on “Open verdict at Woolworths inquest”