PAGE 3, Channel 5, Wednesday (NNN) — The makers of a documentary on assisted suicide have defended their decision to film a reality TV show revolving around the concept. 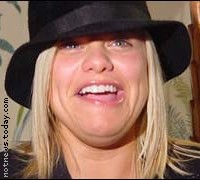 In I’m A Celebrity, Get Me Out Of Here Permanently, Z-list celebrities are locked inside a house festooned with knives, guns, poison, copies of Virgin Killer and each other. “Never Gonna Give You Up” by Rick Astley is played twenty-four hours a day at 100 decibels. As housemates are slowly and exquisitely killed off by public vote, the contestant list gets down to two deserving finalists who, in a surprise upset, are both fed into a woodchipper feet first in a cheering finale for all the family.

“As a broadcaster,” said Barbara Gibbon of Sky Real Lives, “we believe that there is a role for television to inform public debate about even the most challenging subjects. We particularly enjoyed challenging Nicola McLean to count to ten without using her fingers, before suffocating her on her own breasts in the Lolo Ferrari Trial.'”

Dr Peter Saunders, director of the campaign group Care Not Killing, earlier accused programme makers of a “cynical attempt to boost television ratings.” He changed his mind when he heard the contestant list. “On reviewing the matter, we realised that seeing David van Day forced to actually eat his own arsehole live on television would create an increase in happiness and good cheer that would save at least five hundred suicides of worthwhile humans and was therefore a moral imperative. I’m leaving Virgin and going to Sky tomorrow.”

Prime Minister Gordon Brown told the Commons he was personally opposed to assisted suicide, but urged George Galloway to add this show to his television CV.