PAGE 3, Financial Times, Friday (NNN) — Alistair Darling today admitted that the economy was disastrously seized up, with one in twelve London workers likely to lose their job. 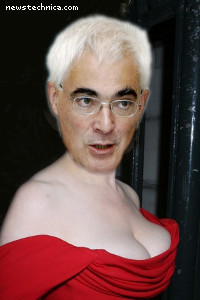 Across town, Nigella Lawson wore a low-cut dress revealing quite spectacular quantities of well-nourished breastage, with photos in all papers.

In the United States, Wall Street is melting away like Belloq’s face after Indy told him not to look in the Ark and Henry Paulson said he would not use the second $350 billion of the stimulus package, leaving the economy unpushed at a critical time and the Detroit car manufacturers on the verge of collapse.

In Australia, Nicola McLean’s breasts, which had undergone hyperinflation, were marvelously decorative and pointy and set off nicely by the other I’m A Celebrity bikini babes, Dani Behr and Carly Zucker, despite the influx of Robert Kilroy-Silk and kangaroo testicles.

Back in the UK, the economy is deflating, the banks have seized up, no-one is buying or selling houses and next week you’ll have to eat your shoes. And John Sergeant is a huge tit.

“But at least we’re not short of massive boobs,” said Mr Darling. “And call and vote on Strictly Come Dancing! Before the telly’s repossessed.”