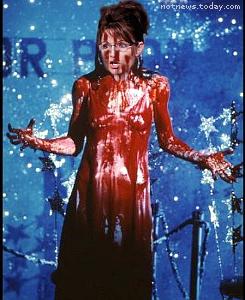 “They said I di’n’t know where Africa was!” said Mrs Palin. “And that I blew the kegger budget on my new dress! They’re just jealous of my popularity as Homecoming Queen. Look at First Dude in a suit! Isn’t he just dreamy? They just wish they had all the guys falling at their feet. I’m the beauty queen here and you’re not. I had forty-five percent of the country wanting me!”

“You know how Mr McCain said ‘Leave Sarah Palin alone’?” said an anonymous McCain staffer. “Well, he was lying. He was just setting her up for humiliation. Because she deserves it. Bitch.”

“You jerky bitchy meanies!” shouted Palin. “I’ll tell Senator McCain on you! And your bitch meany jerky stuff! See if I don’t! I’ll run in Ted Stevens’ seat and you’ll never kick me out! So there!”

Exasperated, Professor Obama threatened to hold the entire Republican Party back for detention until 2016.