MANCHESTER, San Andreas, Friday (NNN) — Police constable Gary Bayldon, 48, who admitted having sex with one woman while on duty and propositioning another after she had been arrested, blamed the influence of the Grand Theft Auto video game series and the BBC TV show Life On Mars for corrupting his mind. 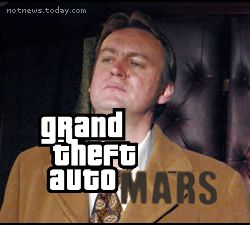 Bayldon had a poster of Gene Hunt from Life On Mars on his locker and was known for preferring to drive his patrol car using a video controller, while telling those protesting “you so much as belch out of line and I’ll have your scrotum on a barbed wire plate.” His habit of calling himself “Claude,” ramming other cars and shouting “SCORE!” every time he hit a pedestrian also worried fellow officers.

Bayldon met one of the women after arresting her in a domestic incident involving her boyfriend at her home in October 2005. “She was as nervous as a very small nun at a penguin shoot,” said a fellow officer. “It never did click that wasn’t a way to meet a good girlfriend.”

“Despite being corrupted by the evils of the popular media, you as a police officer have very considerable power and the respect of the community you serve in,” Judge Charles Tilling said, passing sentence. “Your use of cheat codes and hacks is an abuse of that trust.”

“You’re not the one who’s going to have to knit himself a new arsehole after twenty-five years of aggressive male love in prison,” said Bayldon.