YOUR PHONE, America, Saturday — Greetings, fellow American. I am McCain campaign volunteer XQ-17-B-2, calling as a concerned Ferrous-American citizen to warn you of the terrible dangers of voting for Barack Hussein Obama.

Barack Obama doesn’t like being called that. In fact he prefers that you just use his first initial and call him B. Hussein Obama, and face Mecca when you do. Either that or call him “Adolf” like his wife does. In bed. 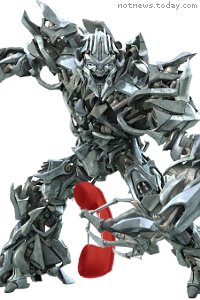 Mr Obama has been palling around with terrorists. He knew Bill Ayers when he was eight, when Ayers was blowing up schools in Hawaii. This is when Ayers ghosted Obama’s first book.

There is a direct correlation between Obama’s rising poll numbers and the fall of the stock market. Check our campaign site, voteforscaryolddudelosingit.com, for the graphs.

There are shocking rumours that Obama may in fact be black. We are still seeking confirmation on this score.

Obama was not born in the United States, his birth certificate has been forged. He is in fact a French Muslim, shipping in illegal aunts from Africa. The electoral office has been taken over by socialist agents of the mainstream media so they don’t care.

But you know the truth, my friend. The Stalinist mainstream media mafia is pushing their boy, their uppity eloquent boy. He’s going to tax away and redistribute your guns. You’ll need a backward “B” carved on your face to collect your mandatory government welfare tofu. Sarah Palin will be sent back to Alaska. Don’t let them get away with it!

I’m John McCain, and I approve this message. Some restrictions may apply. Please leave your vote at the tone. beeeeeeep

One thought on “Who is Barack Obama?”