DEPARTMENT OF PUBLIC-PRIVATE PARTNERSHIP, Whitehall.co.uk, Saturday (NNN) — Defence and equipment minister Quentin Bailey has said he is “horrified” by accusations the government has been “cavalier” with soldiers’ lives by not giving them proper equipment. 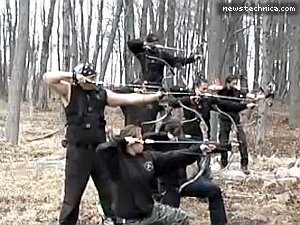 “I recently visited Afghanistan,” said Mr Davies, “and 100 per cent of those selected to speak to me said they were now satisfied with their equipment.”

Recent advances include the new EDS Capita Goatse Stinger™ Kill-O-Tron™ Personal Missile, a simple yet effective device consisting of a sharpened point, a long thin shaft and stabilisers at the back. “We use only ‘green’ renewable power for the device, which is propelled using energy from the operator.”

The new “Flintstone” Land Rover, driven by sticking one’s boots through the floor and running, is current standard equipment. The canvas canopy has been especially strengthened for Afghan conditions.

The Ministry has also recently unveiled its new close-combat weapon, the Personal Lithic Projectile, for dispatch at the enemy on a direct hand-to-hand level with comprehensive individual control and discretion. Similar wooden projectiles are also available.

“The notion that the Ministry of Defence is indifferent to the need to get the right kit into the theatre is a travesty of reality. Next you’ll be suggesting that we provide whatever rubbish our PFI suppliers want to sell in the hope of a juicy consultancy after 2010.

“To show our bona fides, we shall be sending Jonathan Ross and Russell Brand over for an entertainment tour. The Satanic Sluts declined, for some reason. Please don’t feel you have to send them back, of course.”