TORCHWOOD THREE, Cardiff, Wednesday (NNN) — US Vice-President Dick Cheney is to receive treatment to correct an abnormal heart rhythm, his spokeswoman has said. 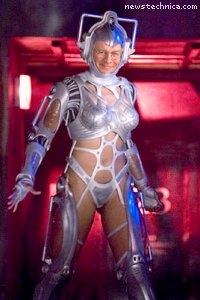 Markets would have been shaken at the news that Mr Cheney possessed such an organ had they not been utterly exhausted already.

“During a visit with his mechanic this morning, it was discovered that the vice-president has internal organs similar to those of a human, including one organ that apparently pumps blood,” said his spokeswoman, Megan Mitchell.

“However, we have given him a large supply of cute puppies and fluffy bunnies to bite the heads off, rip apart with his bare hands and so on, and he is on his way to a full recovery.”

The vice-president has been treated for the condition before. In July 2007, he had what was meant to be the last stage of his complete cyberneticization and abolition of the last traces of puny “human” emotion.

“I only hope McCain makes it in on election day so we can finish cyberizing him as well,” said Mr Cheney. “We’ve already replaced his morals with a clockwork mouse mechanism remote-controlled by Karl and have a killer Stepford fembot shadowing him to keep him … on-message.”