MORDOR, RedMonk, Tuesday (NNGadget) — In a triumph of marketing over marketing, the next version of Windows will be called “Windows.” 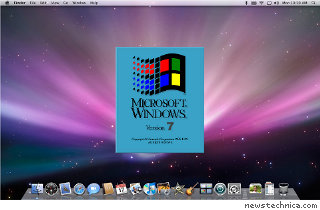 “Nuts to you and your ‘Windows $NEXT_VERSION’ jokes,” said Microsoft CEO Steve “Trains Run On Time” Ballmer. “It’s Windows %NEXT_VERSION%, and fuck you! WordPad and Paint will kick your ass.”

A new line of advertisements, made on Apple Macintoshes, is set for 2009:

Canonical, Inc. shares were up 5% in early trading.