PAGE 3, Channel 5, Monday (N! News) — Viewers will have the opportunity “to see more of our finest creative advertising minds at work” under proposals put forward by Ofcom to deal with the drop in television advertising revenue. 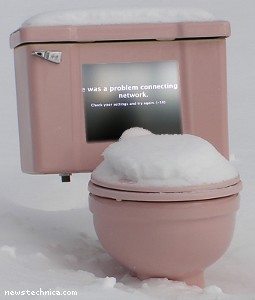 The report notes: “The advertising industry is powerfully adept at producing thirty-second immaculately-constructed visual masterpieces, perfect for the modern on-the-go citizen. We also hope to bring long-form works to the viewer, which they presently must seek out themselves on home shopping channels. We feel this will alleviate the monotony of shows such as The X Factor.”

“We want to ensure that viewers continue to benefit from a wide range of advertising-funded television services. We feel there is no prospect of this backfiring, as it’s not as if there’s any alternative to television,” said the preliminary report, which is also available on YouTube and BitTorrent.

“Ofcom has taken on board our opinion that any suggestion of ‘regulatory capture’ by the bodies it is meant to set the rules for is piffle,” said Channel Four. “But we understand these moves are controversial, and strongly suggest people call in with their opinion on our 0900 line, at only 95p a minute.”

2 thoughts on “Creativity to be promoted on commercial TV”