The key technical innovation of the GNUPhone is that it is completely operated from the command line. “What could be more intuitive than a bash prompt?” said seventeen-year-old Debian developer Hiram Nerdboy. “The ultimate one-dimensional desktop! Just type dial voice +1-555-1212 --ntwk verizon --prot cdma2000 --ssh-version 2 -a -l -q -9 -b -k -K 14 -x and away you go! Simple and obvious!” 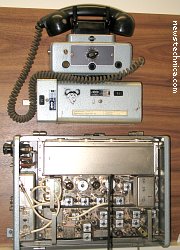 The phone will also serve as a versatile personal media player. “I can play any .au file or H.120 video with a single shell command! The iPod could never measure up to this powerful ease of use.” Video is rendered into ASCII art with aalib. “If blocky ASCII teletype softcore pinups were good enough for 1970s minicomputer operators, they’re good enough for you. Respect your elders.”

The KDE project will be bringing its next-generation KDE 4 desktop to the GNUPhone. “you can flip, twirl, dice, blend, fold, spindle and mutilate your terminal windows to your heart’s content,” said developer Aaron Seigo. “look at that cool effect! any complaint that basic functions don’t actually work is ignorant of the intrinsic beauty of the plasma api and is just more fud spread by haters like stevie ray vaughan-nichols and novell corporation.”

Actual successful voice calls are expected by 2011 to 2012. Regulatory approval is proving problematic in the corrupt, corporate-captured US environment. “The FCC said that if we dared switch on this, uh, ‘piece of shit’ in a built-up area in its present form, they’d break all our fingers with a fourteen-pound cluebat,” said Nerdboy. “They’re obviously shilling for Apple, Nokia and Microsoft.”

The second version of the GNUPhone will run EMACS on the HURD kernel and be operated by writing eLisp macros on the fly. “It’s the clearest, most elegant and natural operating environment anyone could conceive of,” said Nerdboy. “Really, we’re not out to destroy Apple; that will just be a completely unintentional side effect.”