OUT WITH THE CHAPS, Hooray Club, Sunday (NNN) — Otis Ferry, son of singer Bryan Ferry, has been refused bail on charges of robbery, assault, perverting the course of justice and being an arrogant over-monied young twat. 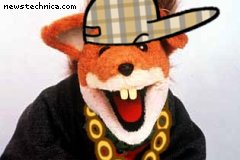 His mother, former model Lucy Helmore, was worried that he was “without any clean socks and shirts” in prison, and that he will not be able to cope with confinement because he “loves the outdoors so much,” particularly the bits where foxes are ripped apart by dogs.

Mr Ferry was charged with assaulting a hunt monitor and stealing her camera and keys and threatening a prosecution witness on these charges, as well as being an arrogant over-monied young twat in general.

He has had visits from his equally talented and worthwhile friends Pixie Geldof, Jade Jagger, the Allen kids and one of the lesser McCartneys.

His mother added: “I think this whole thing has been politically motivated.” A spokesfox for the Metropolitan Red Fox Association called such claims of a fit-up “scurrilous” and denied allegations of a six-month surveillance operation by undercover urban foxes. “Is it ’cos I is red?” he added belligerently.