PAGE 3, Channel 5, Friday (NNN) — Abi Titmuss has been flagged as the hot prospect for leader of the Labour Party in the leadup to the Annual Conference. 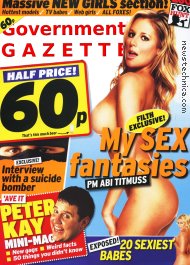 The party has searched for a suitable candidate who is actually ideologically distinguishable from any of New Labour. Ms Titmuss’ cheeky grin and cheerful attitude are expected to resonate with voters, as are her breasts. She is also considered ideal for a job whose expected term is about fifteen minutes.

“As long as you can ’ave a larf, innit,” said the future Prime Minister and former nurse, television host, author, actress and woman foolish enough to have shagged John Leslie.

Should her 2010 bid for re-election fail, she is expected to run for Mayor of London in 2012, getting more magazine coverage than even Ken Livingstone managed. “Boris is still a bigger tit, though.”

Nuts is expected to replace The Sun as the official UK governmental journal of record. Gordon Brown’s name will also be legally changed by party vote to Gordon Arsemess.