INUÉNDEAUX, Switzerland, Tuesday (NNN) — The Large Hardon Collider, to be turned on tomorrow, is designed to pump various types of hardon up to huge energies before banging them together. However, many concerned citizens without the personal experience or understanding of what hardons do worry at the idea of the large hardons being sucked deep into a black hole. 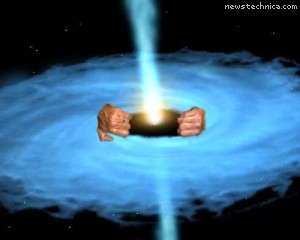 The device will push large, energised hardons through a ring repeatedly, faster and faster, as smoothly and tightly as possible, until they clash and spray matter in all directions. “It’s nothing that cosmic rays don’t do all the time all over the place,” reassured a particularly buff scientist. “It’s perfectly right and natural.”

Low-energy hardon physics and the temperature dependence of hardon production are well understood, as is the process of a hardon smoothly entering the nucleus. But some question what may happen at greater, hotter energies.

Church leaders have come out at the device. “They’re the same polarity!” said Pope Palpatine XVI. The Church worries that strange matter may recruit normal matter and turn it strange.

The Large Hardon Collider was to launch in May, but this has been delayed until mid-September. “I’m so sorry,” stammered a scientist, “this has never happened to us before.”