HORSETRADER’S, Beltway, Sunday (NNN) — The small-goverment Republican Presidential administration, whose fundamental economic belief is to allow the free market to reach solutions without official interference, has nationalized the giant Fannie Mae (FNM.PK) and Freddie Mac (FRE.PK) mortgage associations, placing them under the control of the Federal Housing Finance Agency. 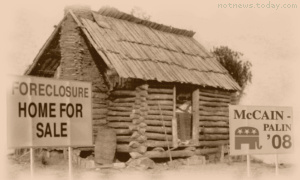 “This is absolutely within our ideology,” said Treasury Secretary Henry Paulson. “We have a lot of money in those markets ourselves, you know.

“We owe it all to the bedrock of our economy: the ordinary hard-working taxpayer. You resisted the siren call of credit cards, lived within your means to save for a rainy day, never took out an interest-only mortgage, credit score to make Jesus cry. Without taking every penny you saved over the $100,000 guarantee, we’d never have made it. And the best bit is, we know you’ll still vote Republican! God bless you all!”

President Bush has recruited his brother Neil as a consultant, after Neil’s expert involvement in the savings and loan collapses of the late 1980s. “I can’t believe he got clean away with that one.”

Mr Bush stressed his commitment to his core constituency. “The bankers and Wall Street traders. Just because you showed ridiculous incompetence in lending doesn’t mean that you, and the hideously exposed like me, don’t deserve a second chance. God bless America! And its hard-working backbone! And there’s still their pensions for next time!”