LAIR OF EVIL, Conseil Européen pour la Recherche Nucléaire, Friday (NNGadget) — Dr Evil’s plans to destroy the earth have come ever-closer, with the construction of a Large Hadron Collider in a secret location in Switzerland. 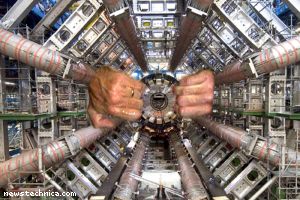 “Unless the governments of the world give me one hundred beelion dollars, I shall pull the switch that shall send the world to relativistic doomsday! As well as greatly advancing physics and our understanding of the secrets of the universe.”

Dr Evil’s Large Hadron Collider threatens such fates as the destruction of the Universe through a recreated Big Bang, strangelets converting all normal matter, wormholes in space and time or the possible creation of the World Wide Web.

The citizenry of the world have risen in protest, with lawyers, psychologists and other persons highly versed in particle physics attempting to stop the device through the courts. This is attributed to the accidental creation of a strange moron particle, which spreads through the world turning everyone it encounters into more strange morons.

In a capstone of evil, the Large Hadron Collider will run Windows Vista. “See if it doesn’t! Muwaaahahahaha! I’m sorry, that was gratuitous. It runs Google Chrome, of course.”