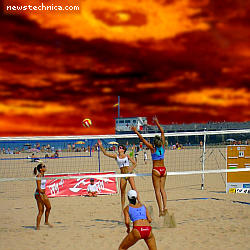 The famed North-West Passage is now permanently navigable, with huge shipping volumes between Arctic nations. “We’re considering just building a highway straight across,” said Mrs Palin, “though those long desert drives can be dangerous to health without air conditioning.”

Tourists have been flocking to Alaska and northern Canada to get away from the boiling oceans and sulphurous atmosphere around Hawaii. The Nunavut Tourist Bureau has shipped 60,000 swimming polar bear shirts this month alone. “It’s also clear,” said Palin, “that the bears have no business claiming to be endangered when there’s so many jobs in tourism for them.”

Oil drilling in Alaska will also be much easier, and will of course further the conditions leading to this Arctic economic boom. “No it won’t,” said Palin. “What are you talking about?”

“I’ll say one thing for them evilutionist climate change conspirators,” giggled Palin, “their hard work to take away the ice and make it look like they were right has done wonders for us good and decent folk.”