STENCH OF DEATH, Redmond, Wednesday (NNGadget) — Microsoft has discounted the entry-level Doesn’t-Do-Much Xbox 360 to $200 from Friday, $50 cheaper than the Nintendo Wii. (This will translate to a £250 price point in the UK.) 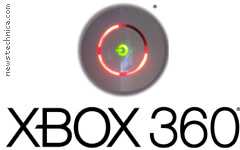 “We are thrilled to be the first next-generation console on the market with a big ‘Microsoft’ logo on it to reach $199, a price that invites everyone to enjoy Xbox 360,” said Aaron Greenberg, marketing marketer for Xbox. He says this will cause a “smash and grab” mentality amongst consumers. “And not ‘grab and smash’ as they throw it out the window when it gets a red ring of death again.”

The models that actually play anything worth playing will, of course, stay at $300 and $400. “But history shows that more than 75 percent of all console sales happen after the price falls below the $200 mark. Which would be the PS2, PSP and DS … uh, forget I said that.”

Greenberg assures consumers that the new cheap Xbox 360s will not be refurbished red ring of death casualties. “Not all of them. Honest. However, twenty Xbox lifts every morning will be much better exercise than Wii Fit.”

Microsoft Japan is already actually paying people to take the machines, with little success. “We hope more people will be able to enjoy Xbox 360,” said marketing marketer Takashi Sensui, “and we can stop enjoying quite so many of them. We also have this fine pile of HD-DVD drives … Wait! Come back!”

Greenberg further assured consumers that “the Xbox 360 will kick the PS3’s ass every way from Friday, you wait and see.” Nintendo were unable to comment in time for this story as they were still too busy trying to make Wiis fast enough to keep them in the shops.