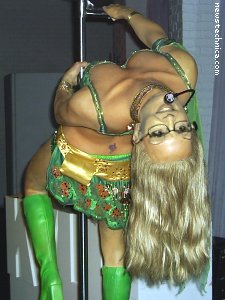 “LEAVE SARAH ALONE!” Mr McCain cried, his eyeliner smearing. “How goshdarn dare anyone out there make fun of Sarah after all she has been through!”

McCain pooh-poohed suggestions that the last-minute choice of a creationist Pentecostal abstinence-touting book-banning Alaskan separatist gun nut with crossed eyes eerily reminiscent of Dan Quayle’s and the conversational powers of George Bush was in any way hasty or pursued with less than the utmost of diligence.

“All you people care about is readers and making money off of her. SHE’S A HUMAN! What you don’t realize is that Sarah is making you all this money and all you do is write a bunch of crap about her. LEAVE HER ALONE! You are lucky she even performed for you BASTARDS! LEAVE SARAH ALONE! Please! LEAVE HER ALONE!”

Mrs Palin giggled and smiled for the cameras, before bagging three of the more obnoxiously liberal journalists with her handy Hello Kitty AR-15.