PUTIN’S TROUSERS, Manly Heaven, Sunday (RT) — Vladimir Putin has taken a brief pause in lambasting the effete Westerners to save a Russian television crew from a Siberian tiger while visiting the Ussuri reserve in Siberia. 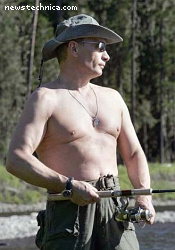 As Mr Putin was arriving to see a trapped Amur tiger, it escaped and ran towards the camera crew. Putin is said to have quickly grabbed the 200kg beast, raised it above his head, body-slammed it to the ground, called its mother a Georgian, buggered it senseless and finally tranquilised it with three blows about the head from his engorged manhood.

The former KGB spy had several takes filmed of him striding through the taiga in camouflage trousers, desert boots and no shirt before he grappled with the tiger, that part unfortunately not being recorded. He helped measure the Amur tiger’s incisors with his massive penis (also not filmed) before placing a satellite transmitter around the neck of the beast, firmly gluing it on with his own testosterone.

“Vladimir Putin not only managed to see the giant predator up close but saved our crew,” gushed a presenter at the start of the main evening news. “The Leader stopped off only to fertilise my receptive womanhood with his pounding manliness. I am deeply honoured to further his superior Russian genes.”

Putin thanked Western researchers for also attempting to help save the Amur tigers. “But come to me and I’ll show you how to do it right. EU girly men.”

One thought on “Heroic Putin saves workers from tiger”