TEH INTARWEB, Silicone Valley, Friday (N! News) — Aaron Sorkin, creator of The West Wing, has been contracted to write an awful, awful movie about Facebook. 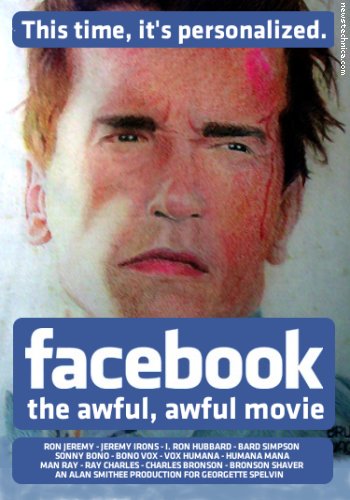 “I can write funny and poignant television dramas and I can work a toaster,” said Sorkin. “So I thought, ‘how hard can this Internet thing be?'”

Facebook: The Awful, Awful Movie will tell the story of how Mark Zuckerberg invented binary digits as a toddler and the web browser in his Harvard dorm in 2004, and how every single person in the world joined up by 2007 to play Scrabulous Wordscraper. The planned sequel, to be filmed simultaneously, tells how Facebook solves conflict in the Middle East, cures breast cancer and, in Soviet Russia, pokes you.

Facebook: The Awful, Awful Movie will be released direct to YouTube in late 2009 and no longer be available shortly after.