PHONING IT IN, The Beach, mid-afternoon (NNN) — An ambulance service has praised a five-year-old boy after he successfully called 999 to report that his mother had collapsed and was unconscious in their home. 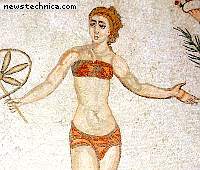 In other news, a pet wears a seatbelt, alleged scientists have yet again discovered a formula for the perfect attractive woman (it apparently involves being short with long legs and large breasts), there’s a piece on ancient Roman bikinis, how to make the perfect cup of tea and lots of pictures of sunburnt, drug-addled women in bikini tops at a summer rock festival, including ones that aren’t Amy Winehouse. And it’s hot.

Crop circles have fallen out of favour in recent years. How the A-levels these days aren’t as good as proper A-levels were back in my day, you mark my words, remains a perennial favourite. With pictures of students in bikini tops.

“We’re holding out hope of the first skateboarding duck of the season,” said one of the few reporters still left in the office. “In the meantime, I’m researching a story about a long, short-breasted, large-legged sunburnt woman in a Roman bikini top making me the perfect cup of tea.”

A Metro writer was nonplussed at this line of questioning and asked precisely what was supposed to be different to their usual content.