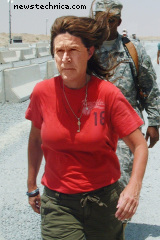 Bush, the governor of Alaska, is a former Miss Alaska, Vogue model and mayor of a suburb of Anchorage, and a firm believer in creationism, the global warming conspiracy, compulsory heterosexual marriage and the right to life only up to birth. “I firmly believe Sarah W. Bush is the most qualified person to be a heart attack away from the presidency,” said Mr McCain. “What is it exactly that the V.P. does all day?” giggled Sarah.

One thought on “McCain picks George Bush as running mate”