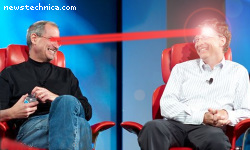 The news was carried in an obituary run by Bloomberg late last night, which was pulled when news of his resurrection came through.

“They don’t call it the Jesus Phone for nothing,” Jobs laughed with reporters, before eating their tasty, tasty brains.

Jobs’ new cyborg arsenal includes wifi, 3G, laser cannons, a flame thrower and a can opener, all running on Mac OS X Robosteve. Bundled applications include an enhanced hypnotic force field based on the one he uses at MacWorld keynotes. “I can’t wait to try it on Bill,” he said.

Disney, in which Jobs is the single largest shareholder, remained unaffected. “Steve’s just working with the way we do things here,” said the disembodied computer-hosted soul of Walt Disney, who was decanted to a computer in 1966 to avoid being declared legally dead, so that copyright in his works would never, ever run out.