THE MEMORY HOLE, Whitehall, Sunday (NNN) — Annual reports from Whitehall departments show that the government has lost all data it ever held on anyone. 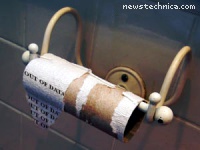 Losses have occurred through couriered unencrypted disks, misplaced memory sticks, lost laptops, briefcases left on trains and files falling down the side of the tea machine. “The real scandal is that a train was running for them to lose a case on,” said a source whose name has been lost.

Treasury minister Jane Kennedy said the HM Revenue and Customs breaches did not necessarily result in data losses, or at least any that they have records of. HMRC said it takes data losses and security breaches “very seriously” and thoroughly investigates any breach that it does not lose track of.

Information Commissioner Richard Thomas has served enforcement notices on various departments for their data losses, but the departments in question could not find their office addresses to accept the notices. They noted, however, that Mr Thomas’ call was very important to them, and that he had been placed in a queue.

Home Secretary Jacqui Smith reassured citizens that plans for an all-encompassing ID card linked to biometric passports and a universal medical record with the NHS would not change because of these losses. “We won’t even be thinking about them.”

One thought on “UK Government loses all data on everyone”