HOT HOT HOT, Forever Alone, Thursday (NTN) — 35% of US smartphone users admit to using apps before even getting out of bed. Doctors advise the other 65% that it is “entirely natural” and “nothing to be ashamed of.” 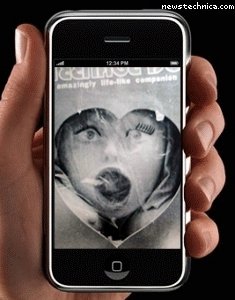 The most popular in-bed activity admitted to is accessing “social networks,” as respondents called it, doing air-quotes. The most common complaint is that the screen is too small to display photos properly, and that it does not wipe clean sufficiently well. Many were tempted to buy a tablet next.

Smartphone vendors and app writers have tried to capitalise on the bedroom market. Vibrate mode is particularly popular and is thought to be driving the accessories market for protective silicone cases.

“Social networking” (air-quoted) remains important when people first wake up, since most are alone and will forever stay that way. 20 percent do a last “check-in” (also air-quoted) before going to sleep at night.

Sociologists suggest the bedroom “apping” phenomenon will be self-limiting, given the effects on fertility of carrying a microwave transmitter in your pocket all day right next to your gonads.