GOLDACRE, Moron Piers, Friday (NTN) — New results showing strokes could be caused by coffee, sex or blowing your nose were hailed by the tabloid media as the “new cancer.” 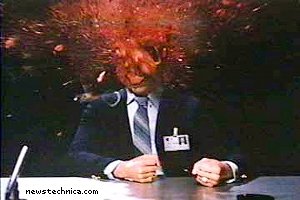 The study on 250 patients identified eight risk factors linked to bleeding on the brain: sex, coffee, nose-blowing, Nick Clegg, Tories, mind-buggering stupidity, the Daily Mail and being related to its readers.

Associated Newspapers have long worried at the decline in the market for things that could possibly cause cancer. Scare stories on strokes — starting at everyday things and progressing to everything — could make up the difference.

“For the general population our findings on strokes do not apply,” said the original researcher, Dr Monique Vlak, though that bit was inexplicably left out of any of the newspaper reports.

The Mail is now seeking out researchers at second-string universities in need of publicity for a mutually advantageous relationship establishing that strokes can be caused by homosexuals, swan-eating Eastern Europeans, declines in house prices and not buying the Daily Mail.

They feel their position is particularly strong with Richard Littlejohn on hand to give their readers’ brains a taste of what might befall them.