SLIGHT INDISPOSITION STAR, Communal States of America, Saturday (NTN) — Medal of Honor, a popular video game that lets you play as the unAmerican team, has been banned from US military bases as “insensitive.” 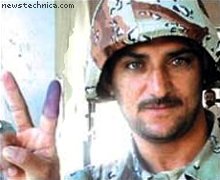 After moral panics, including from UK Defense Secretary Liam Fotherington-Thomas — who issued official condemnation of the game as “horrid” — US military officials decided not to stock the game in the nearly 300 base exchange shops.

“This game is disgusting and violent,” said Maj. Gen. Bruce Casella, “and gives the impression that our actions in Afghanistan involve dangerous weaponry and people getting hurt. We cannot risk such appalling propaganda reaching our lovely soldiers and their delicate psyches.”

General Casella announced a new version of America’s Army, in which US soldiers go to the fictional country of Wartornistan, and sing songs, dance to psychedelic rock and paint flowers on tanks. Usually opium poppies.

Electronic Arts, makers of Medal of Honor, responded with plans to make a version of America’s Army in which you can play either the hippies or the troops at Kent State.