HEY HEY 16K, Need To Know, Saturday (Big K) — Activision has announced its new playalong title, Video Game Hero, in which the player immerses himself in the world of the cultural hero of the twenty-first century: the gamer. 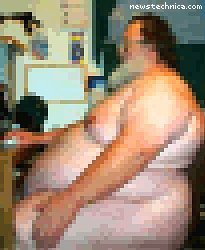 The player enters a virtual parents’ basement and starts shadowing an expert game of Tetris. He works his way up through pretending to pretend to farm an imaginary farm in a virtual version of Facebook to going “yeah, see?” next to a non-player character pimping nonexistent hoes in Grand Theft Auto. Additional modules kill your player and call you “n00b” and “fag.”

But it’s not all video playalong — players have to click to gain additional powerups of Cheetos and Diet Coke. Traps include hygiene points and female players. An Anime Expo subgame requires the player to cosplay a character one-third their avatar’s weight, a foot shorter and the opposite sex.

The game comes with an authentic imitation controller, with all the buttons of a real controller.

Later titles this season include Journalism Hero, in which you follow the bouncing cliches on a screen and try to cut’n’paste the phrases in increasingly bizarre and meaningless combinations to win the most Google hits for the day and keep your job.

However, scientists at the Print Publication and Buggy Whip Institute issued an epistle cautioning that Journalism Hero could lead to short attention spans, shallow emotional affect and blathering buckets of shite over anyone in range.