ONE APPLE WAY, Cupertino, Saturday (NTN) — iPhone developers are up in arms at Apple requiring them to use only Apple toolkits, sacrifice a Windows developer at their local Apple Shop every Sunday and maintain an altar to Steve Jobs in their homes. And eat a bug. 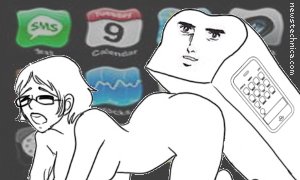 Apple is famous for its rigid control over its devices, in its quest to maintain user quality. Developers have worked under increasing restrictions in their attempts to provide quality applications for the iPhone such as I Am Rich, Magic 8 Ball and iFart.

“Not a big deal,” said Mr Jobs in a personal email. “Cross-platform development leads to a worse user experience every time. Also, the video of you eating the bug has to be H.264 QuickTime or your app is out. Extra points for cockroaches.”

“This clause shows a fundamental lack of understanding of the creative freedom developers need,” said iPhone developer Greg Slepak. “Software is an infinitely malleable creation of pure thought. Toolkits, languages and frameworks are only a way to develop something people will want. It’s like telling Rembrandt what brand of brushes he’s allowed to use.”

He paused to chow down on a palmetto bug for his MacBook’s camera. “I’ll tell you, a lot of iPhone developers are seriously considering Android, just as soon as Google develops a suitably exploitable stream of mindless thralls that will generate us a gushing torrent of money.”

“Thanks for the video, Greg,” said Mr Jobs, “but we’ve just added section 3.3.1.a: ‘In particular, when Greg Slepak submits an application, the bucket of cockroaches in the video have to be Apple-branded and genetically engineered in Cupertino.’ So we’ve rejected your application, cancelled your membership and zeroed your account.

“Of course, you’re free to apply again. Or not, if you don’t want a goddamn dumptruck full of money backed up to your house. It’s a free country.”