WE APOLGRPHVM FOR THE DELGHRMFPH, Stopping at Land’s End, Tuesday (NTN) — National Rail has announced new trains specially designed for the possibility of “weather” being warned of by the climate change deniers of the Met Office. 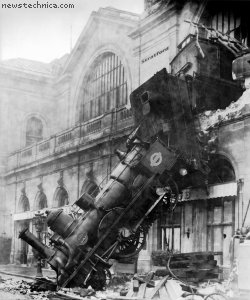 Should the new TGB (Train à Grand Bureaucratie) detect the right type of snow under the wheels, it promptly deploys its measured cargo of the wrong type of snow, carried in a refrigeration unit at all times. The incorrect snow is sprayed onto the track ahead of the train, followed by grit (from another car) and then a blast from the included oxy-acetylene flamethrower to melt the wrong type of snow. At the back of the train is a unit to re-temper the steel tracks the train has just passed after having rendered them brittle with the extreme heat. For summer, the train carries a supply of the wrong type of leaves. The train carries its seventeen cars of supplies and one carriage of passengers, if any can be found willing to travel on it, at speeds in excess of fifteen miles per hour.

Customers remain sceptical. “Back in my day,” said Boris Busybody, 77 (IQ), of East Cheam, “we didn’t hold with this ‘climate’ malarkey. We had weather and we dealt with it! If an avalanche of boulders and ice buried the engine and front carriage, the passengers would just get out of the train, sacrifice one of the horses to the goddess Eostre, daub their faces with the blood and burn the driver in a wicker man to melt the blockage. Then they’d get back on the train, settle down to reading the Telegraph and arrive home at St Albans as normal, right as rain! And snow, and sleet, and hail, and frogs. That’s how you beat Hitler!”

“But everyone works to the highest of consistent standards,” said Transport Secretary Lord Adonis. “No-one can say the food on Virgin Trains isn’t every bit up to the same quality as the standard Brimmesh Rull sandwich of the 1970s. Scientists say some are in fact original issue.”