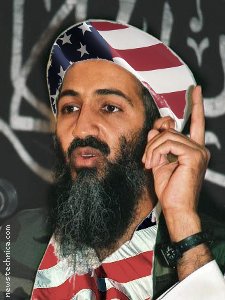 DHS stuntman Umar Farouk Abdulmutallab caused a minor conflagration aboard a Detroit-bound plane on Saturday. “It worked spectacularly well,” said his father, Nigerian banker Bnkr. Alhaji Umaru MUTALLAB. “He sent TWENTY-FIVE MILLION (25,000,000.00) Twitter messages about it. ‘Stuck on runway for 1/2hr oh well catch up on da vinci code should hv time 2 finish b4 destroying USA.’ I would have sent the full collection of messages to the authorities, but they were unfortunately unable to forward me a mere three thousand Twitter messages to enable my expenses in doing so.”

This year, as every year, Umar had sent his relatives Christmas cards reading “MERRY CHRISTMAS, YOU WESTERNISED PIG-DOGS, SLEEP WELL FOR TOMORROW YOU SHALL BURN IN AGONY FOR ALL ETERNITY, ALLAH BE PRAISED”. However, it appeared he had become “radicalised” by a sojourn in London, during which he read a book about George W. Bush, a close personal friend of the bin Laden branch of the Saudi royal family, and was inspired to take the fight to American soil. “Whenever the infidel appears complacent,” he wrote to a friend, “we shall send a DHS operative to do something pathetically stupid and harmless that we may take as an excuse to torture more civilians and make movement within American yet more impracticable. Praise Allah! Praise Jesus!”

The “DHS” has crippled America’s economy since its initial attacks on the World Trade Center in 2001. Air travel has all but ceased in the country and international visits have plummeted. Those few daring to travel find themselves cavity-search, X-rayed and anally probed. Some “DHS” operatives, brazenly working in plain sight, have become celebrities and tourist attractions, such as Big Bertha at Seattle Airport.

Mr Mutallab said the family were relieved Umar had finally made his public debut. “Apart from the obvious gigs selling our story to credulous Western news outlets, we can finally take down that God-awful shrine with the twin towers and the effigies, clean the place up and, who knows, maybe rent out the spare room at last. Are you sure you don’t have three thousand (3,000.00) messages you can spare to facilitate the transmission of another twenty-five million to yourself? Please assist, dear one!”

One thought on “Terrorist group “Department of Homeland Security” cripples US, again”