BULLINGDON, Nothing Hill, Sunday (NTN) — David Cameron has rejected claims that there are few policy differences between the Conservative Party and conservatives. “We’re all fluffy and nice now. Honest. Would this face lie to you? How about this one?” 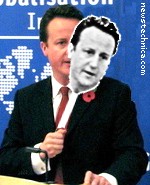 The Conservatives have been making friendly overtures to conservatives in recent months, desperate to reassure those in their base disaffected by talk of “progress” and “fairness,” and avoid a hung parliament where anyone has to acknowledge Nick Clegg’s existence.

Conservative Party chairman Eric Pickles has been suggesting to conservative constituencies that perhaps they should vote Conservative. “We want to make it absolutely clear that we do not discriminate on number of fingers, and we will say the age of the Earth is whatever the voters want it to be.”

“Look,” said Mr Cameron, “there’s Boris! A top chap, what? And almost competent these days!” Mr Johnson promptly cycled into a tree, to applause and a laugh track.

Mr Cameron has noted that, in any case, “Labour will continue to be Labour.”