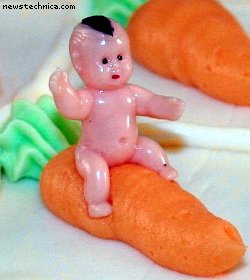 Early paid press coverage for Windows 7 lauded its theoretical likelihood of boiling babies in the near future, as compared to the effects of Vista, which left many of the babies with frostbite. “But we are fully confident that with Windows 7, we can get the baby up to 90, 100 degrees every time!” The fine print on the benchmark results revealed these figures were Fahrenheit, not Celsius.

Steve Jobs snorted in derision at his rival’s pathetic attempts to do something useful, before revealing Apple’s new iBoil™, which fits in your pocket and will lightly sautee the baby with a bechamel sauce and garnish.