BRUSSELS, Belgian Empire, Thursday (NNN) — The Imperial Belgian Regime has concluded the first stage of its revival with the coronation of Herman van Rompuy as Imperator and Father of All Europe. 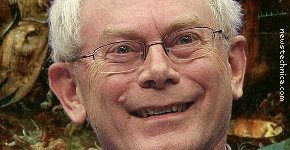 “I shall bring to you all unbounded prosperity and joy in life,” said Emperor Herman, “in appropriate moderation and with due attention to subclauses (iii)-(v) of section 12 of the third chapter of the memorandum of coronation. We must take care not to go overboard.”

Belgium’s new rise as an imperial power comes after the failure of its early twentieth century African colonial adventures. Later in the last century, the country instead played to its strengths of beer, chocolate and bureaucratic obfuscation, quietly hanging around at the centre of things and making itself useful whilst clogging up all around itself with red tape.

“Imperial Belgium will usher in a new era of brotherhood,” said the Emperor, “with the correct paperwork. The horrors of war will become administratively unfeasible as the Pax Belgia renders the necessary forms and tender documents mysteriously unavailable or unavoidably delayed. Whatever language a citizen speaks, their words will be circumlocutory and obfuscated, facilitating accurate and fidelitous translation into all other tongues with no loss whatsoever of meaning or comprehensibility. The promise of Babel is ours.”

Baroness Catherine Ashton is the British appointee to the position of Chinless Imperial Foreign Minister. Critics claim she has never had a proper job nor a non-appointed political position. However, she points out she was elected by 100% of the twenty-seven voters.

The UK Independence Party continued to call for Britain’s withdrawal from the Empire. “It is beneath the dignity of a Great Power such as Britain to become a new Belgium. We advocate the far preferable fate of becoming the new Albania.”