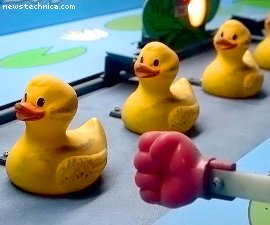 “The challenge lies in the characterisation and identification of the specific chemical that gives away the signature of human fear,” said project leader Professor Tong Sun of City University, “especially the fear of losing funding for security theatre. If we can reliably detect this fear, we should be able to land some eyewateringly lucrative contracts in the very near future.”

The research is funded by the Home Office. “The project relies on a government with a firm commitment to policy-based science, but the Tories look as craven over David Nutt’s firing as Labour, so we should be coining it in for a good while yet.”

The technology will assist airport security officers in picking out suitable subjects. Sensors can reliably detect if someone is a bit brown, or a bit foreign-looking, or has a non-Anglo-Saxon name, or if they might be thinking of giving cheek to security officers. It will work in conjunction with the millimetre-wave “naked” radar, currently used to identify terrorist subjects with large breasts.

The false positive rate will be only 5% on a terrorist detection rate of 1 in 100,000, meaning only 99.95% of subjects flagged will be a complete waste of time to finger up the arse with a latex glove. “But we’re sure the government will agree that mere statistical evidence is meaningless in the face of the vital necessity to send the right message,” said Prof Sun, “that if you make trouble the government will quite literally forcibly fuck you in the arse until you bleed. So just shut the fuck up and keep giving us money.”

One thought on “Device that “smells” snake oil could identify terrorists”