TOO FAR DOWN UNDER, Marketers At Work, Saturday (NNN) — In the quarter-final ad break of the Australian Football League grand final, Kraft has revealed the winning entry in the competition to name its new spreadable Vegemite cream cheese mix: Axle Grease Shit 2.0. 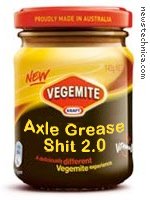 The winning name was submitted by Dean Robbins, 27, of 129 Cowle Street, West Perth, Western Australia 6005. “What? Won? Fuck off. Really? Oh Jesus. I just thought it was funny. Look, we were really fuckin’ stoned, right? The big jars make great bongs. It gets really dull in Perth. Just don’t print my name or where I live, all

I said, do you spikka my language?
He just smiled and chundered Axle Grease Shit 2.0 all over me.

Colin Hay from Men At Work has reprised his most famous song for the commercial, but did want it noted that it was only because he was desperate for the cash and that he would be ritually killing himself immediately after the recording. “I might throw myself into a vat of Axle Grease Shit 2.0. There’s nothing like it!™”

When the going’s hard
Don’t retard
Remember your lubrication.