“It’s vitally important,” said Mr Fletcher, recipient of an MBE for services to children’s broadcasting, “that I use the full range of my ability as an actor — funny accents, pantomime drag and more funny accents — to educate and enlighten the children of Britain to their very first encounters with tired comedy tropes and decades-old clichés. I’ve also notified the BBC Trust that I’m fine with CBeebies being renamed the Justin Fletcher Network. And a knighthood next January.” 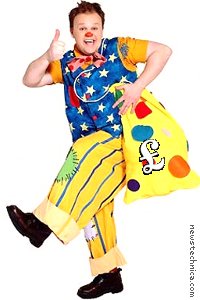 The dangerous expansion of Britain’s arsenal of intercontinental ballistic Justin Fletcher shows was made possible by the revelation that middle-aged suburban fathers are not covered by the provisions of the Geneva Convention. “As if Cerrie wasn’t bad enough. The bargain is, we put up with having this crap on all day, you give us eye candy. No, it’s not the gimp hand, that’s fine, it’s that fucking grin. What happened to Pui? At least we have her old topless shots. Lesbian punks wahey! I’ll put up with Cerrie for some gimp-on-girl action. Deal?”

Attempts to wrench toddlers away from the screen were futile, resulting only in the Makaton for “my cult masters will wreak their revenge upon your puny race.”