ABBEY NORMAL, London Lite, Wednesday (N! News) — Major British recording artists will meet to try to hammer out a truce on their views on the Mandelson-Geffen “three strikes” proposal to cut off filesharers. 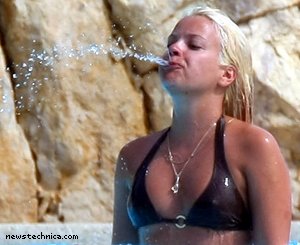 Radiohead, Pink Floyd and Blur have said the proposals are unworkable and will only alienate people. However, Lily Allen has come out strongly in favour of the proposals, saying that “the fackin’ slags need a good fackin’ kickin’. It’s fine for the rich fackers, but it’s all a bit of a rum do for the starving artistes like me, what? Er, I mean, fack the fackin’ fackers. Innit. Blud.” She then accidentally exposed one of her nipples.

Lily Allen came to popularity from filesharers pointing to her MySpace page. “Fackin’ fans, fackin’ fack the fackers,” she wrote in a blog post plagiarised without attribution from TechDirt. If she copies two more blog posts, or if anyone notices the mixtapes of other artists’ music on her website, her Internet will be cut off.

James Blunt has backed Ms Allen’s position strongly. Respecting his stance, filesharers across Britain have sworn never to download a James Blunt song again if they can possibly avoid it, several taking out insurance against such an event.

Jim Killock of the Open Rights Group has put forward a proposal for a small mandatory licence percentage for copyright holders, as on radio and television. “We plead with the music industry not to throw us into the mandatory licence briar patch,” said Mr Killock, “in which no-one ever buys a record again otherwise as they’ve already paid for it. Please.”

“Punk Floyd … weren’t it them what did ‘Beatlearchy In The UK’? Hippy crap,” said 14-year-old music fan KT Myspce, loading up another Lady Gaga song to play in the background from YouTube.