OOMPA LOOMPA VILLAGE, Silicone Valley, Friday (N! News) — Katie Price has reportedly sent Peter Andre late-night texts claiming that she is still in love with the publicity she got with him, telling him the magazine covers were her “farytaele” in one message and that “I <3 ur pblicty & wnt 1 mr chnce” in another. A third message referred to the custody battles over the pair’s paparazzi. 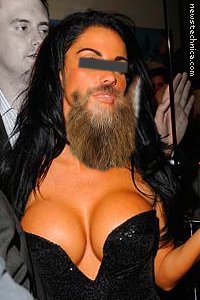 She sent the messages two weeks before the pair’s quickie divorce, as covered in all papers on Tuesday. The Sun ran a cover shot of Ms Price in her finest orange, the Daily Star ran an old topless shot, George Monbiot in the Guardian praised the ecological soundness of her idea-recycling (though Hadley Freeman fatuously compared her and Andre to people with actual talent) and the Economist reported on the value of ghostwritten novels, autobiographies and autobiographical novels as mass-produced commodities, with its Intelligent Life supplement detailing the advances in computerised text generation.

The news is sure to devastate Ms Price’s cagefighter side of beef Alex Reid. “There is no way she would be sending those kind of messages with Alex in the room with her,” said an unnamed source at her public relations agency, “and I doubt he’ll be pleased. Until she explains to him in grunted monosyllables and a few pokes of the cattle prod the whys and wherefores of getting on front covers.”

Meanwhile, the now-uncovered news areas of politics, health care, world news and financial news have been swooped upon by the gossip magazines. The cover of Closer features the bags under Gordon Brown’s eyes over time, while Heat features the lesbian Icelandic prime minister’s old bikini shots. Both magazines said they were continuing to turn down paparazzi shots of Tony Blair, no matter how many he sent in.