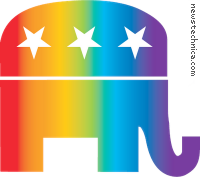 Duvall has insisted he is “not sexual” and that the female lobbyist he spoke of is “really a guy”. “I made up all of these stories! I have two children, so I’ve had sex, uh, that’d be twice. Republicans get married and we only think about money from then on. I swear.”

Many Republican groups are outraged. “If you’re going to break God’s covenant, do it good and hard,” said the Rev Ted Haggard. “None of this pussy-footing around. Geddit? See what I did there?”

Others were less concerned. “These people are implying that fucking a lobbyist with business in front of your committee looks like some sort of ‘corruption,'” said Mark Sanford. “Honi soit, dude. Honi soit.”

Gay groups welcomed the news, having long begged conservative politicians, ministers and commentators to, for the love of God, stop being gay. “Bathroom gropers,” said spokesfag Elle Lucius, “glory hole cocksuckers with herpes sores around their concealed mouths, shadowy men in tight Levis doing unspeakable things in piss-stinking alleys and on massage tables that light up like Christmas under blacklight … these things are all very well in their place. But those suits! That polyester! Dear God, can’t they afford better tailoring? Don’t these people have suburbs to go to?”

The Democratic gay contingent, the Log Cabin Democrats, have long had trouble pushing their point of view in their own party, with their strange and antisocial predilections for decades-long committed relationships rather than the furtive liaisons in airport bathrooms favored by the GOP.

One thought on “Republican in “heterosexual” sex scandal”