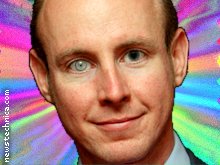 Mr Hannan told Randroid magazine that the 1930s German chancellor understood “the importance of a really good motorway.” He later told the BBC he was a “libertarian” on immigration, but was fully on-side with Mr Hitler over the right grade of asphalt and suitably wide turning circles at interchanges. “His expertise in these matters really isn’t appreciated these days.”

The MEP caused controversy two weeks ago when he gave a stirring speech on US television saying that the NHS would lead to “rivers of blood” — prompting Tory leader David Cameron to ask the media to “pay no attention to the silly, silly man behind the curtain” and gently remind Mr Hannan that getting elected next year would be quite nice, thanks.

Mr Hannan also became a hit on the video sharing site YouTube, with a three minute speech in the European Parliament attacking Gordon Brown, that was set to a clip from the movie Downfall and had “Dragostea Din Tei” as backing music.

The Conservatives said Mr Hannan would not be disciplined because his praise for Mr Hitler had not referred to the late politician’s stance on immigration. “He does have some quite eccentric views about some things,” said Mr Cameron. “Ha! Ha! There’s a reason we sent him off to Europe, where he couldn’t do much harm. Daniel, do feel free not to comment in public on anything whatsoever until next June, there’s a good chap.”