NO MICROSOFT WAY, WebTV Centre,Wednesday (MSBBC) — Microsoft has unveiled new technology that will allow the BBC to completely outsource its technology news section to Microsoft. 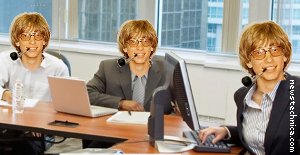 This cements an informal relationship that has been in place since BBC News slimmed down surplus staff such as subeditors, proofreaders or most of the journalists. “Tech news is a brutally competitive area,” said Ashley Highfield of Microsoft, formerly of the BBC. “It’s a race against time to be first with the rewrite of the press release. I must point out, by the way, that my current job is in no way related to the Microsoft-based technology I put in place when I worked for the BBC.”

The new technology will automatically pull in Microsoft press releases, add grammatical errors, talk down to the reader, substitute technical terms with inaccurate synonyms and then misspell them and put them in quotation marks. Articles will be padded with analyst quotes computer-generated by an expert system describing how Google will destroy rainforests and Apple phones cost too much.

The system is guaranteed robust. “In fact, we’re running it on a refurbished Xbox,” said Highfield. “Absolutely nothing can go wr E74 ◉ ◉ ◉