WEB 1.99 BETA, Cyberspice, Thursday (NNGadget) — Twitter.com crashed on Thursday at about 3pm BST due to a “denial of twat” attack from thousands of virus-infected Windows PCs under the control of terrorist masterminds. It came up again at around 4:30pm, before promptly crashing again under the weight of users all trying to tweet about the twauma at once. 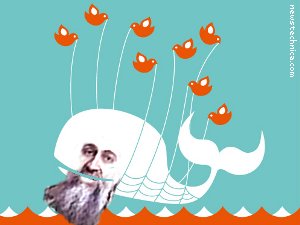 Stephen Fry has been hospitalised and is queueing messages from his PatientLine text terminal in readiness for the site returning. “Twatter ++ungood sweeties zomg I do believe I’m feeling a little faint.”

The source of the attack was originally hypothesised to be either the Russian Mafia, the Iranian security forces, the Chinese government or Alan Davies. Credit was eventually taken by the Confederation of British Industry, who also took down social not-working site Facebook, hoping for people to, you know, do some work at work.

News agencies around the world condemned the attack, which hit at the root of their online news-gathering processes and left them having to resort to following the Wikipedia “Recent Changes” feed. “Apparently BUSH IS GAY LOLOLOL [citation needed],” said the CNN front page headline. “Who knew?”

A new site, “Grunter,” has attempted to take up the slack. Users of “Grunter” are freed from the wordy excesses of Twitter’s 140-character limit and can post one of twelve pre-programmed onomatopoeic noises, such as “mmrph,” “huh,” “grah” or “tubgirl.”

Popular teenage angst poetry blogging and fan fiction site LiveJournal was affected by a similar attack at about the same time, but that attack was considered “just as well, really.”