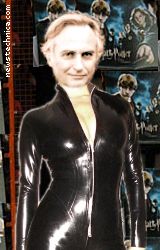 She caused head explosions in approximately a zillion smelly nerds when they heard she was wearing a black leather halter-neck top for the New York premiere. At the British premiere on Monday, Miss Watson “unwittingly” flashed her underwear and half of her left breast at waiting photographers as she adjusted the vintage Ossie Clark dress clinging wetly to her curves in the pouring rain. “At least I was wearing underwear,” she said to David Letterman, taunting the fanboys further.

“We were hoping for something better,” said rebelling Uighirs in Xinjiang Province as the Chinese army hunted them down to torture and kill them. “I mean, goodness me, when she actually reached puberty in the third film. I guess this is her inner Richard Dawkins showing through. KILL THE RELIGIOUS! FREE EMMA WATSON POSTER! Hubba hubba!”

J.K. Rowling was not worried about the weather or the behaviour of the actors. “Money, ME. Me, MONEY. The money flows in ONE DIRECTION. Just keep that straight and we’ll be fine.”